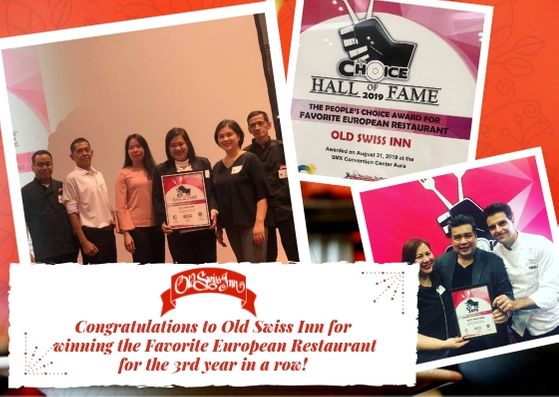 Old Swiss Inn does it again by being crowned as the Favorite European restaurant for three years in a row by the People’s Choice Awards.

The Choice Awards is one of the most prestigious People’s Choice that Honors in the
F&B Industry. Through the first four years, they have celebrated the Best of the Best, and
have elevated the most beloved restaurants to the Hall of Fame after winning their
category three times. This year, Old Swiss Inn restaurant joins their Hall of Fame.

Established in 1946, the Old Swiss Inn was first opened by Emil Landert in Dewey
Boulevard. They are known to be the first to serve Swiss Fondue and other staple European restaurant such as their Fresh corned beef, and Gnagi. Through the years, they have been
consistent with their food quality and is simply the perfect confluence of everything swiss.